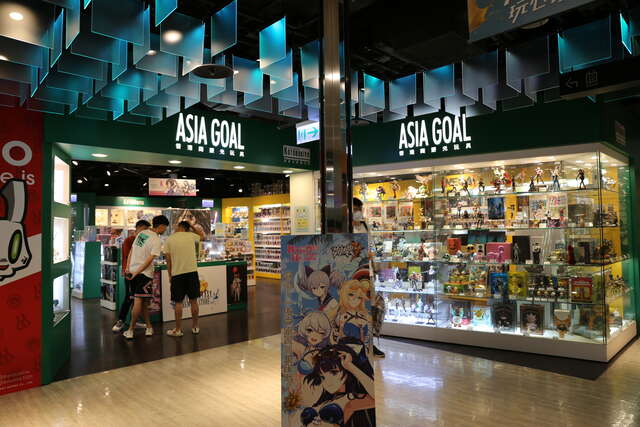 ▲Syntrend has numerous figure shops such as Asia Goal ▲Smaller merchandise and capsules are abundant in arcade areas within the building. ▲Syntrned houses one of the most complete Gundam model shops in Taipei. ▲Card stores, smaller merchandise and figures are also common in Taipei City Mall.
In the Taipei City Mall, connected to the Taipei Train station, a galore of manga and anime-related shops too can be found with just as great an amount of Japanese games from 3DS, Switch, PS4, Xbox to second-hand game disks at shops like 時光屋(Shop Number 67 in the Taipei City Mall). Taipei City Mall also offers different gaming computers or other technological products. Just near Taipei City Mall, there is the Taiwan Manga Base, a government-sponsored venue that often holds manga-related exhibitions and sells many Taiwanese mangas.
【 Wanhua Area Shops】 ▲Animate Cafe offers drink, merchandise, and desert based on themed animes that change from time to time. ▲Taiwan Manga Base has a cafe inside. The poster shows a previous exhibition about the Hong Kong protest, featuring numerous related cartoons and drawings.
Several stores south of the train station have an even more complete collection of manga and light novels, including a larger MagFreak shop and even an Anime cafe. Even though light novels and mangas are easily accessible online in this day and age, reading a solid book and exploring a light novel book shop first hand still offers a priceless experience for any true fan